Weekends can get pretty boring in Tomakomai. After all, this is a port city and an industrial town, whose biggest pride is a shopping mall and ice hockey. I couldn’t count on visiting Sapporo every weekend because that would put a financial strain on my already massively reduced income. (Travelling by train in Japan is pretty expensive!) Still, after two weeks here, I was itching to get out of Tomakomai and explore the neighbouring towns. I figured I could always start from the nearest, and then venture further as I go along. My first destination was the Lake Shikotsu in Chitose.

A caldera lake created by the eruption of three adjoining volcanoes (Mount Eniwa, Mount Fuppushi and Mount Tarumae), Lake Shikotsu is the second deepest lake in Japan. It’s about a 30 minute bus ride from Chitose Train Station. On the weekend I visited, there was a huge crowd of mainland Chinese tourists (well, you can’t avoid them, they are everywhere…). And they were milling around a small jetty which offers boat rides in the shape of swans. After checking out the rental fees, I decided to give it a miss. I headed for the quieter end of the footpath, where there’s a wooden platform that leads down to the waters. There, along with a few others, I took off my shoes and treaded carefully into the waters. This was also a good spot to capture the beauty of the lake, with the surrounding volcanoes. I didn’t stay in the waters for long because the pebbled ground was giving my feet a painful massage, so I retreated to the wooden platform and sat there to soak in the sun and beauty of the surroundings. A colleague told me that there’s a secret onsen resort on the opposite end of the lake (from where I was), the Marukoma Onsen Ryokan (丸駒温泉旅館). The reviews on Tripadvisor and pictures on the hotel’s website do seem enticing. However, without a decent four wheels, I would most likely give it a miss for now.

Two weekends later, my belly tubbies (sorry, Micah, I borrowed your term) are calling out for beer, so instead of paying a ‘pilgrimage’ to my town’s resident shrine, the Tarumaezan Shrine, I decided to book an appointment to visit the Sapporo Beer Factory. It helps that there’s a train station named after it, and walking to the factory from the train station took only about 15 minutes. I was given a detailed commentary by the guide, albeit in Japanese (which means I probably only understood 10% of what he’s trying to tell me). What disturbed me was that my ‘tour’ group comprised a couple of Japanese families with toddlers and 5-year-olds in tow. Surely, this is not the right place to bring your kids for an educational tour, unless you intend to raise alcoholics. Well, at least not yet, in my humble opinion. The kids were creating such a ruckus during the tour that at times, it was difficult to hear the guide. I also made the mistake of picking a weekend to visit the factory, as it was a rest day, which meant that the machines weren’t working and we could only watch videos of the assembly, filling and bottling processes. 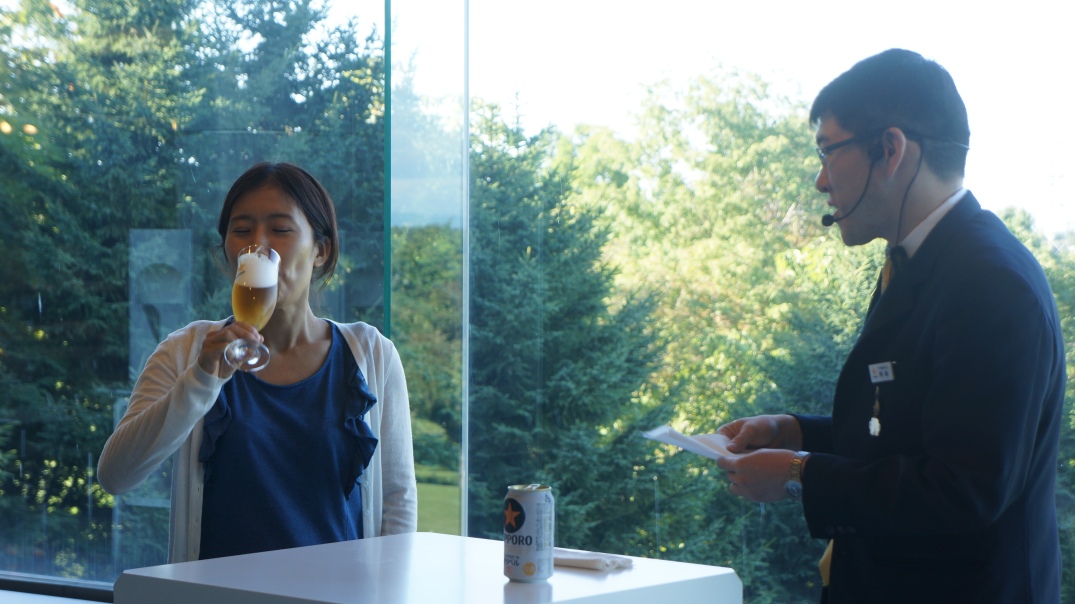 The saving grace of this tour? Two free half pints of authentic Sapporo beer on tap, straight from the source. And you can kick back your shoes at the spacious viewing gallery (which overlooks an expansive golf course) to savour your brew. Depending on your experiences, I would say this tour of the Sapporo Beer Factory beats the one I had at the Sapporo Beer Museum which I wrote about previously, for the simple reason that you don’t pay a single dime for your booze. Call me a cheapskate if you like, but any free beer wins my vote anytime! 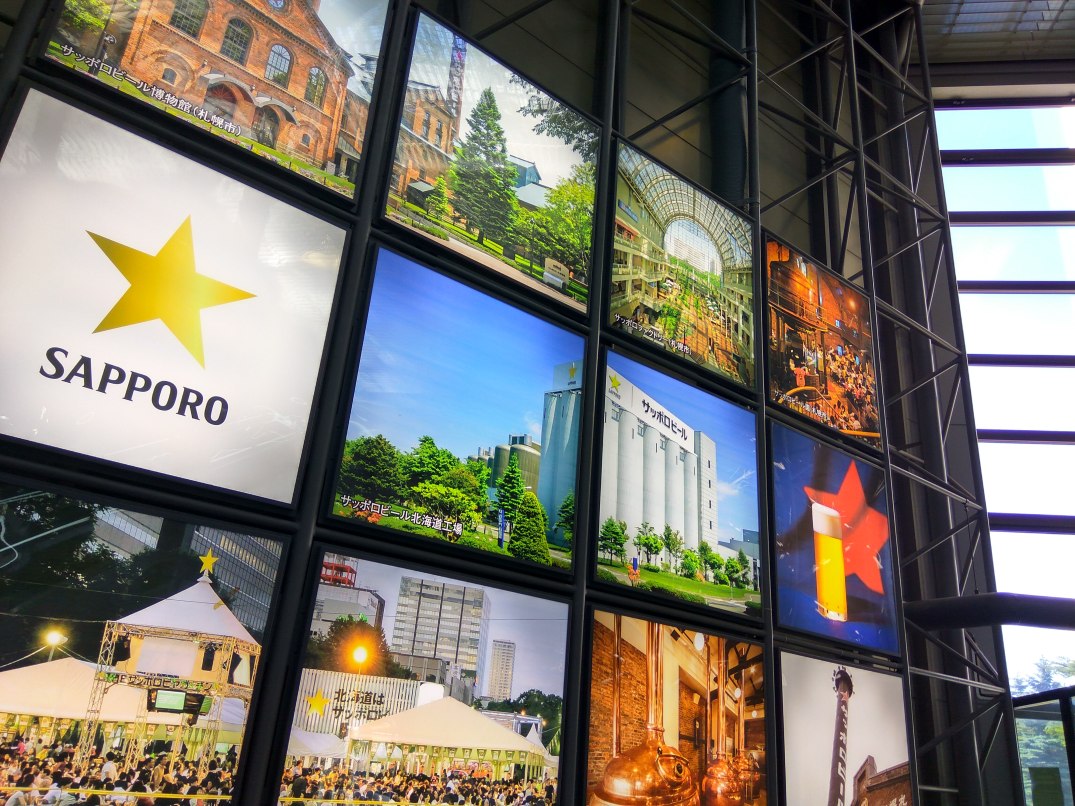 I guess that’s about all Chitose had to offer, so I was ready to venture further this time. The next nearest destination on my Google Maps is Shiraoi, a sleepy rural town with a decent museum and village on the Ainus, the indigenous people of Hokkaido. However, reviews have been average at best, and I’m all too familiar with the Japanese’ love for dioramas, so this Ainu village may not be an exception. I ditched the idea of looking at fake people and animals and instead opted for Noboribetsu. 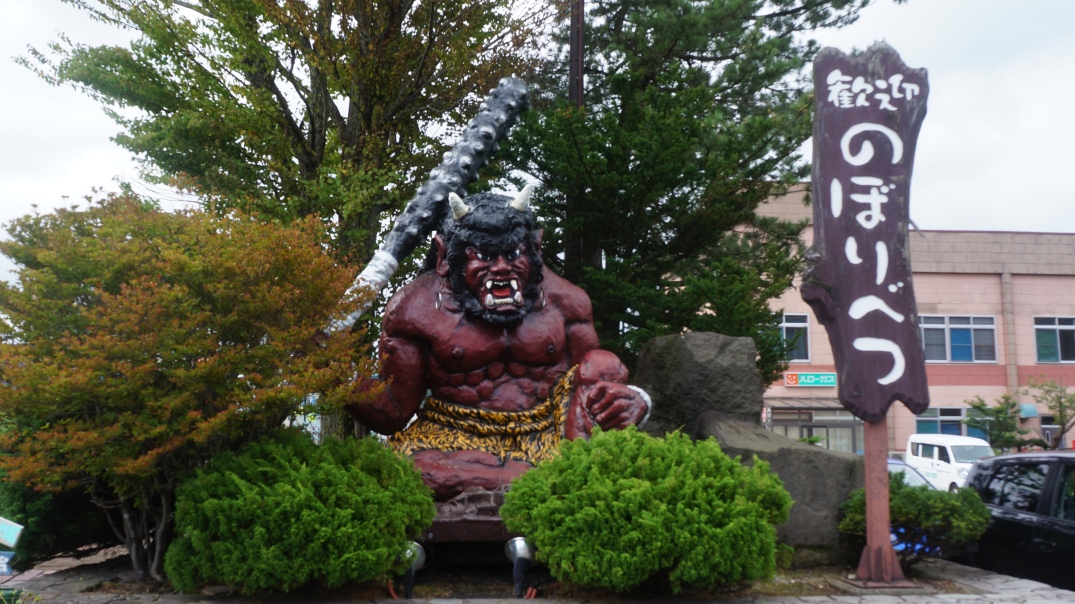 The last time I was in Noboribetsu, I spent a good afternoon exploring the Hell Valley (also known as the Jikokudani) and even managed to squeeze about an hour and a half soaking in one of the many daytime onsens (of course, I went with the cheapest admission given the limited time I had before the last bus). A word of caution to day trippers, the last bus from Noboribetsu Onsen to the train station leaves at 6.58 p.m., so unless you have booked a stay at one of the expensively mediocre hotels here, you probably should really plan your trip. Having said that though, I am still contemplating a weekend staycation here one of these days because though the hotels are exorbitantly overpriced and grossly underwhelming, their onsens are amazing! 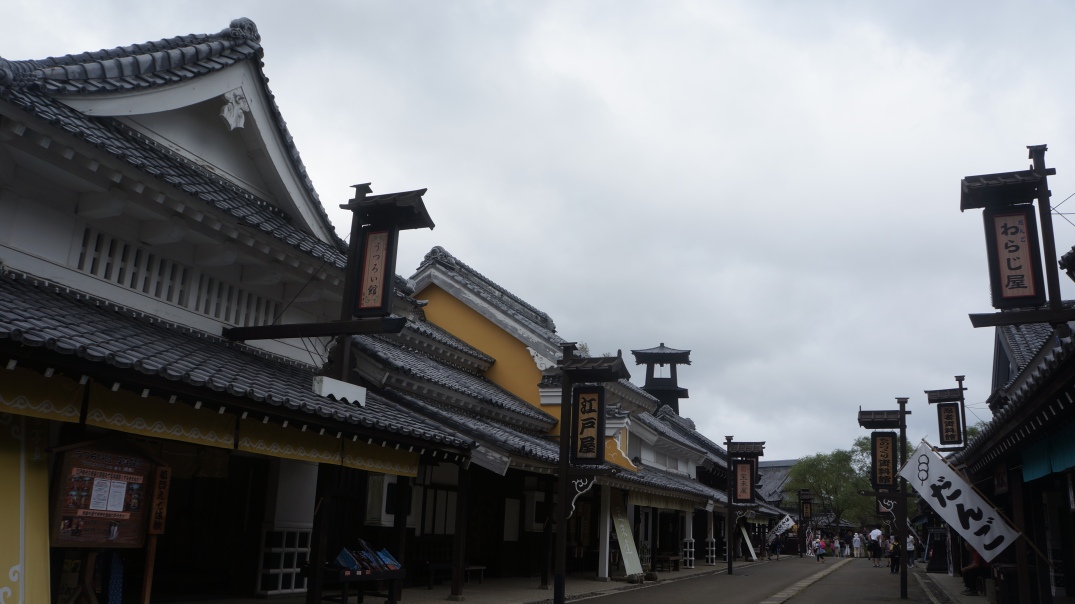 For this trip, I decided to check out the Date Edo Ninja Village (登別伊達時代村) instead. I’ve heard about the famously notorious bear park here, but didn’t fancy the idea of seeing bears trapped in glass enclosures. I must say the admission tickets, priced at 2,900 yen, did shock me a little because by Japanese standards, the prices are slightly on the high side (not including Tokyo Disneyland). Still, I relented since I was already there. The Ninja Village was a good re-creation of a normal feudal town during the Edo period. Of course, there’s the requisite diorama showcase of life during the Edo period, what’s like inside a samurai’s residence and a whole street of trinket and games shops. You could even dress up as a ninja if you like, but for an additional 2,000 yen, I would recommend you do your ninja cosplay at home.

What made this trip worth it though were the cultural performances, and I was really fortunate to be able to catch all of them, almost back-to-back! There were four altogether, including two ninja action shows, a comedy featuring the village mascot, a samurai cat/dog called Nyan and my favourite, an Oiran show. Oirans were top-ranked courtesans a.k.a prostitutes during the Edo period. They actually enjoyed prestige and social status during the Edo period, even invoking a sense of mystique among the common townsfolk. 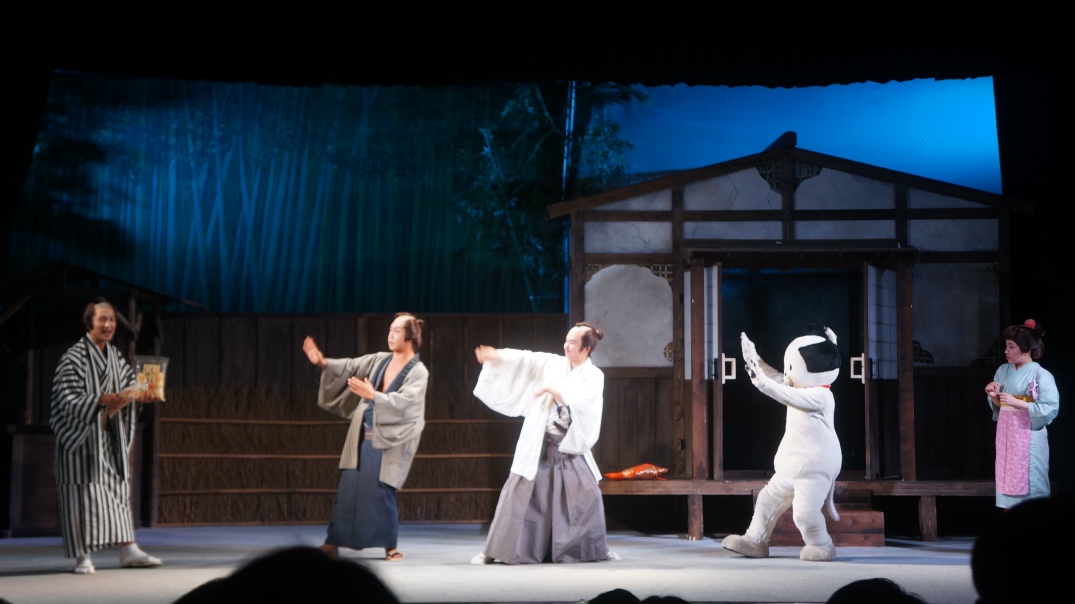 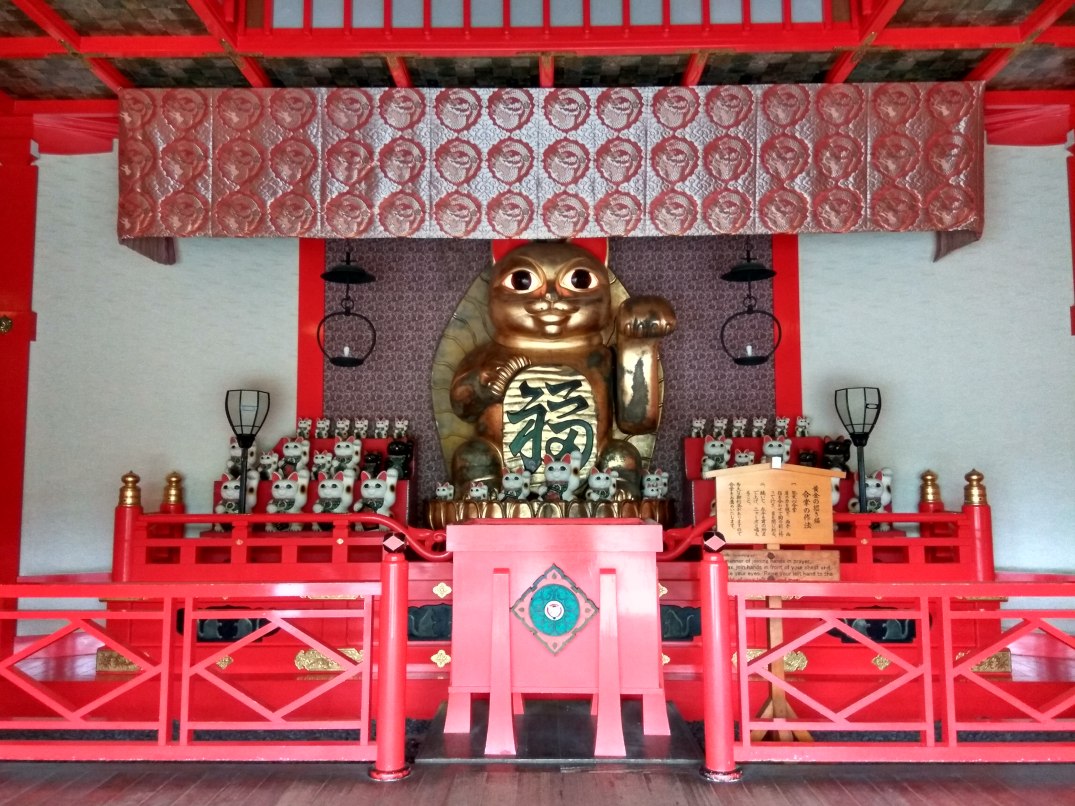 There’s also a whimsically eerie Cat Temple (O-nyanko), with an interesting “haunted house” experience. In fact, the Cat Temple was probably scarier than the adjacent Haunted House (incredibly named the House of Ghosts and Monsters), which turned out to be more lame than horrifying. I also found the Ninja Maze pretty entertaining, seeing people (myself included) struggling to balance themselves on 30-degree inclined rooms. Overall, I had an enjoyable two hours stepping back in time to feudal Japan, and for a while, fantasising about how cool it must have been to be a ninja or samurai. For a split second, I even contemplated lugging a katakana or Oiran doll home from one of the souvenir shops. LS 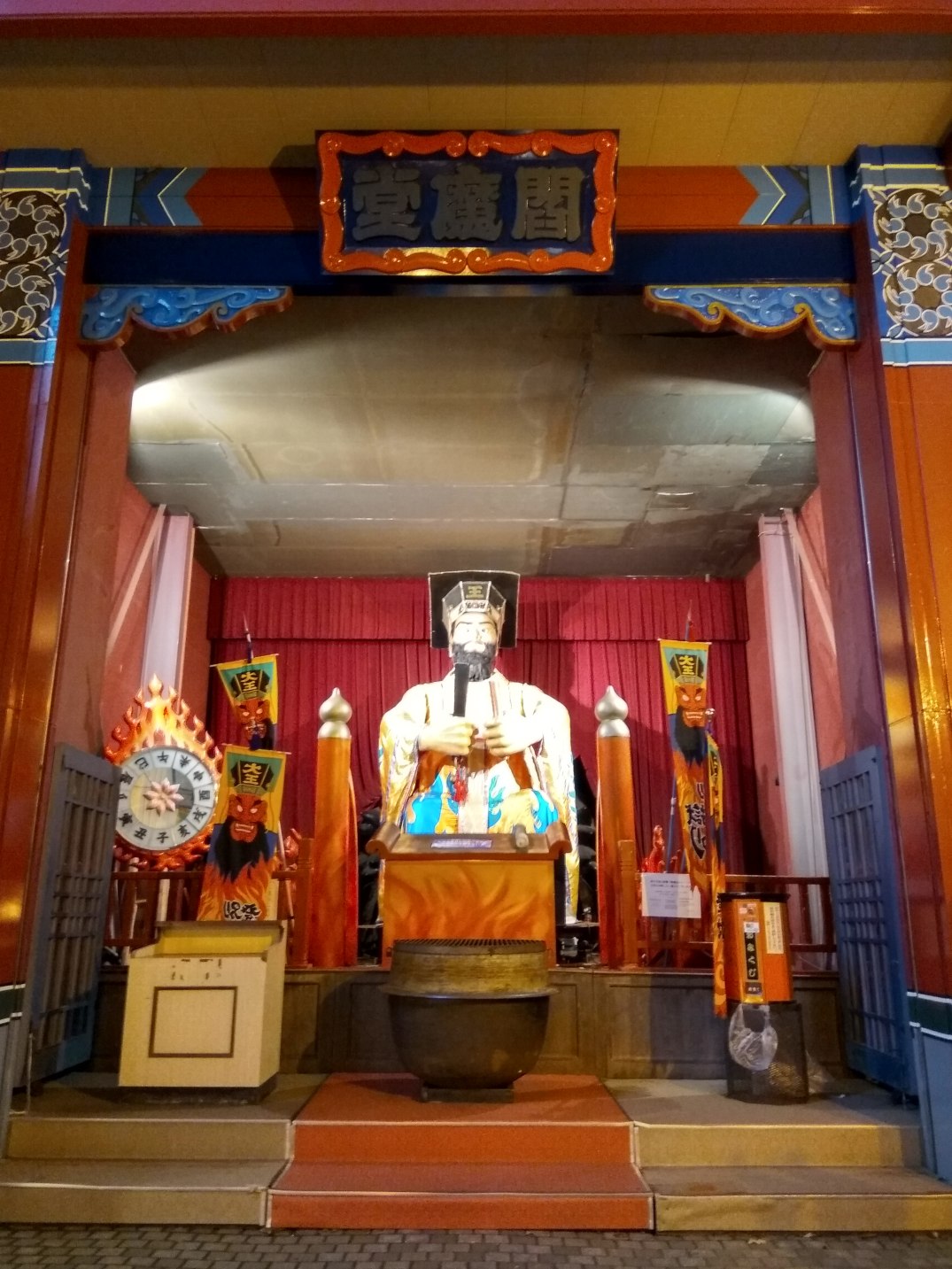