Cries of “Yaaaaaaaaaa…Yaren Soooran Soooran…Hoi hoi!!” continued to echo in my ears as my train left the platform at Sapporo Station bound for Tomakomai. I had gone into town over the weekend to catch the annual dance extravaganza in Sapporo that is the Yosakoi Soran Festival.

Held at Odori Park during early June every year, this dance fest, which drew its name from the original Yosakoi Festival of Kochi Prefecture, attracts Yosakoi dance teams from all over Japan. In its 26th edition this year, the festival boasts some 270 teams and close to 30,000 participants. The festival has indeed come a long way since its humble beginnings in 1992 with only 10 teams and 1,000 dancers.

Weather forecasts prior to the festival had not been promising, with grey skies and rain predicted over Sapporo and in fact, much of Hokkaido. Watching the preliminary performances on TV that morning, it didn’t seem very promising to be honest. Even the event hosts tried valiantly to wear a smile, despite being pelted with rain on their faces.

Needless to say, I was in two minds whether I should make the train ride into the city in the pouring rain. Perhaps, to convince myself that maybe I should sit this one out and watch the performances on the TV, I made one last-ditch attempt to search for an available hotel / hostel on Booking.com. And against all odds, I found one!

A few days ago, all the hotels I scoured were either fully booked or had jacked up their prices by a few times, so to find a place with a reasonable price was nothing short of a miracle! Granted, it was a capsule hotel / hostel, and I have my doubts about capsule hotels in Japan. I was never a fan of confined spaces, especially shared ones. However, the newly opened Grids Sapporo Hotel & Hostel in the heart of the boisterous Tanukikoji Shopping Arcade in downtown Susukino, was a pleasant surprise. It exceeded my expectations of a capsule hotel on all counts.

When I reached Sapporo Station, the first sight that greeted me was dancers in brightly coloured costumes scurrying across the station. I later learnt that this was because in addition to the stage performance in Odori Park, there were also various performance venues scattered along streets in and around Odori Park. So it was a pretty fascinating sight, seeing all these dancers in heavy makeup and psychedelic costumes rushing from place to place, sometimes, with prams and kids in tow, on foot!!

Over the course of the weekend, I would, too, scurry from place to place, camera in tow, trying to catch as many of these street performances as possible. It’s nearly impossible to catch everything, of course, and because the performances were simultaneous at the different locales, you are bound to miss out on some of them.

Still, I would run the length of Odori Park, from 5-chome to 10-chome, hoping to catch the major attractions – those teams that have been tipped for a run-in for the best dancers. And even though the rain threatened to dampen my spirits, the performances from the yosakoi dancers were like energy boosters. The rain served only to make their cries louder and more defiant.

When the music starts, the dancers – men, women, students and children – burst into a flurry of movements, gyrating, spinning, fist-pumping, cheering, shouting, and always smiling. Costumes changed colour every few seconds. Flag bearers waved and swiveled gigantic flags with grace and finesse. Some teams even had a humongous dragon head or parts of a ship, in addition to terraced paper lanterns strung on bamboo poles. 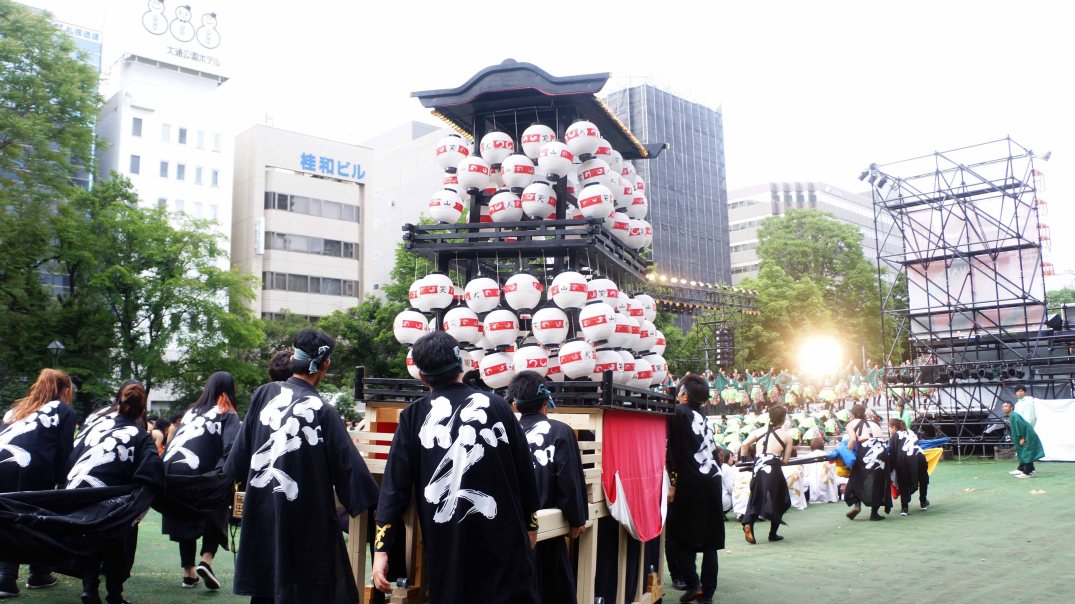 Adrenalin and emotions poured out from their faces, all the months of sweat and toil distilled into that five minutes in the limelight. They seemed to lap up the energy from the crowds, the applause, the rallying cries from their peers, and hearty waves from friends or family members who had come to support.

Personally, I enjoyed watching the university teams the most. The energy and drive that these youths displayed were amazing, not to mention the perfectly executed dance routines. One girl was hobbling on crutches at the dancers’ holding area backstage, her right knee heavily strapped. But when it was time for her team to perform on stage, she tossed her crutches to the ground and rushed onstage with her peers for one last hurrah.

I find myself lost for words to describe the emotions that were running through me as I watched team after team of bullish youthful exuberance exploding on the stage.

It was simply, breath-taking!  LS